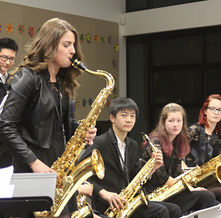 On Friday night 9 August, the Music Academy of Macleod College and the Rotary Club of Rosanna staged the first “Night of Beautiful Music” soirée at the Austrian Club.
The college’s VCE students presented parts of their performance programs, while the Chamber Strings and the Big Band performed the sets of music that they were to take to Ballarat for the Royal South Street Eisteddfod.
One of the highlights of the night was the debut of Megamouth; the chorus of over 40 voices sang a set that they too will perform at Ballarat. It was the largest choir that Macleod had seen for many a long year and a great addition to the program.
The College thanked Rosanna Rotary and the amazing Brian Summers for initiating the evening in such comfortable surrounds.
The evening raised $1,000 for the Music Academy.
South Street Success Megamouth, the Macleod College Choir, achieved their best ever result at the Royal South Street Eisteddfod, placing 3rd.
Silver for Big Band In an open competition against some of the best bands in the country, Macleod College Big Band took second place in the recent “Essentially Ellington Competition”. (Continued on page 3)

The success of the College’s Music Academy continued last week with a third placing at South Street for the Big Band.

Following their South Street successes, the Big Band will stay on in Ballarat for further perform